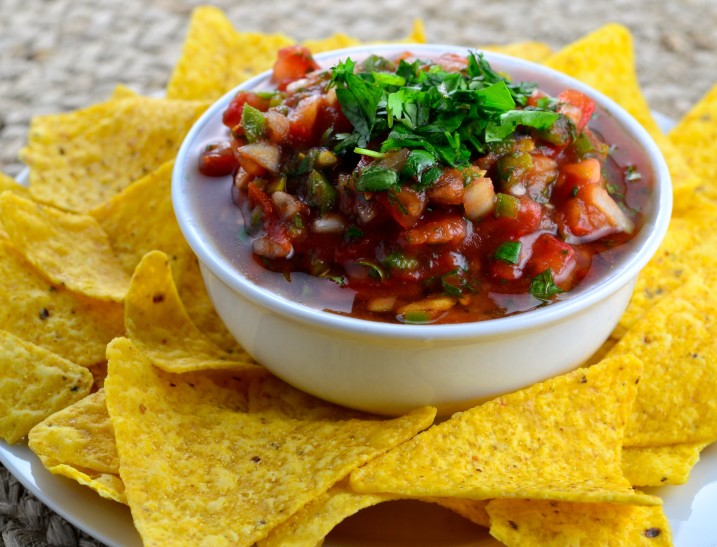 This is a delicious fresh tasting Homemade Salsa Recipe. It’s simple and it’s easy and in my opinion, it’s the best salsa recipe around.

Salsa doesn’t just come from a tub at the grocery store. Making your own salsa only takes about 5 minutes and you’ll find that it’s much tastier than the store-bought version.

Homemade and Fresh Salsa Is Better

Most salsa recipes use canned tomatoes. This easy recipe is made with fresh tomatoes. Fresh tomatoes are a favorite summer ingredient and this recipe is a delicious way to use them.

Homemade is much better because it’s made with fresh tomatoes, onions, and other ingredients you probably have at home.

By making your own you can make it a hot or mild salsa simply by adjusting the amount of pepper used. Either way, this is an extremely easy salsa recipe that your family and friends are sure to enjoy.

Canning salsa is also an easy process. If you would like to can some just make a big batch and preserve if for future use by canning. It only takes about 15 minutes to can it in a water bath canner!

Give this homemade salsa recipe a try. It’s a snap to make and preserve by canning. A great recipe for salsa! 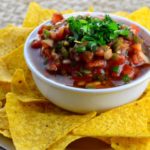 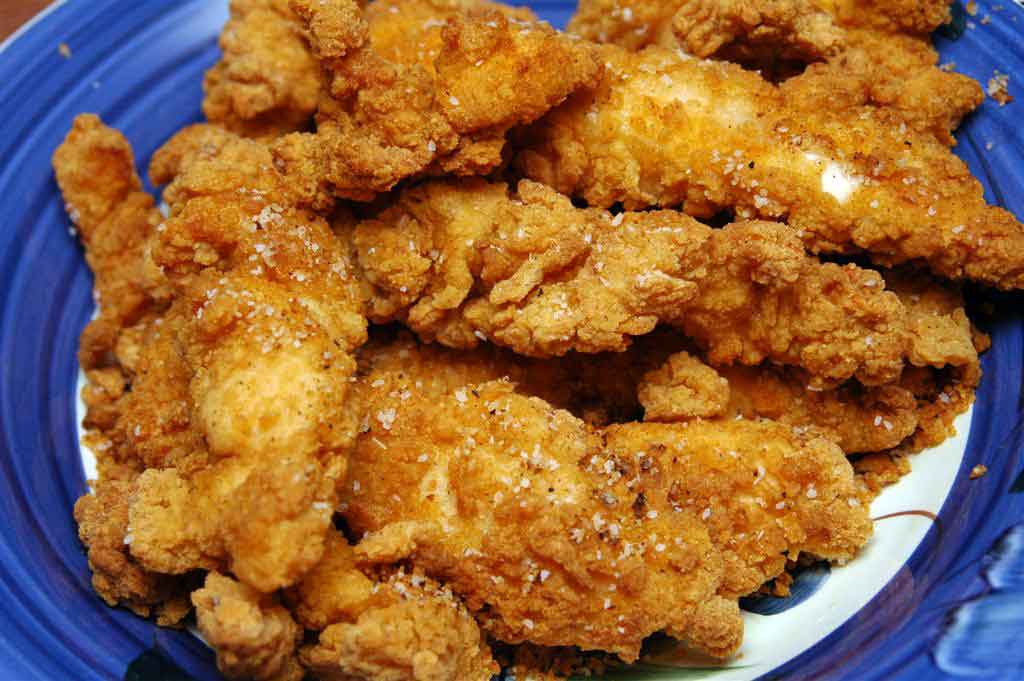 So I’ve compiled a list of the four most loved recipes from Foodgasm Recipes so you can pick the one that appeals to you the most.

I encourage you to try them all. They’re all good! But I expect there will be one that could become your family’s best fried chicken.

I never would have thought to use this ingredient for chicken batter, but this is hands down the best fried chicken ever! The chicken fries up so wonderfully. It’s juicy and moist with a crispy crunchy coating on the outside.…

Look out KFC and a big thank you to the queen of southern cooking Paula Deen for this Paula Deen Southern Fried Chicken. The best I have ever made! I’m not saying this tastes like KFC–only that you won’t be…

There is nothing I enjoy more than good ole southern fried chicken, but this little trick made me happy because I didn’t have grease everywhere… And yes, when I fry chicken like my Grandmothers did, I seem to get grease…

The crust on this chicken will really amaze you. It’s adapted from Alton Brown’s Good Eats show. Not only is it nice and crusty but Alton adds great seasonings also! Great tasting fried chicken! Alton’s technique of applying the seasonings… 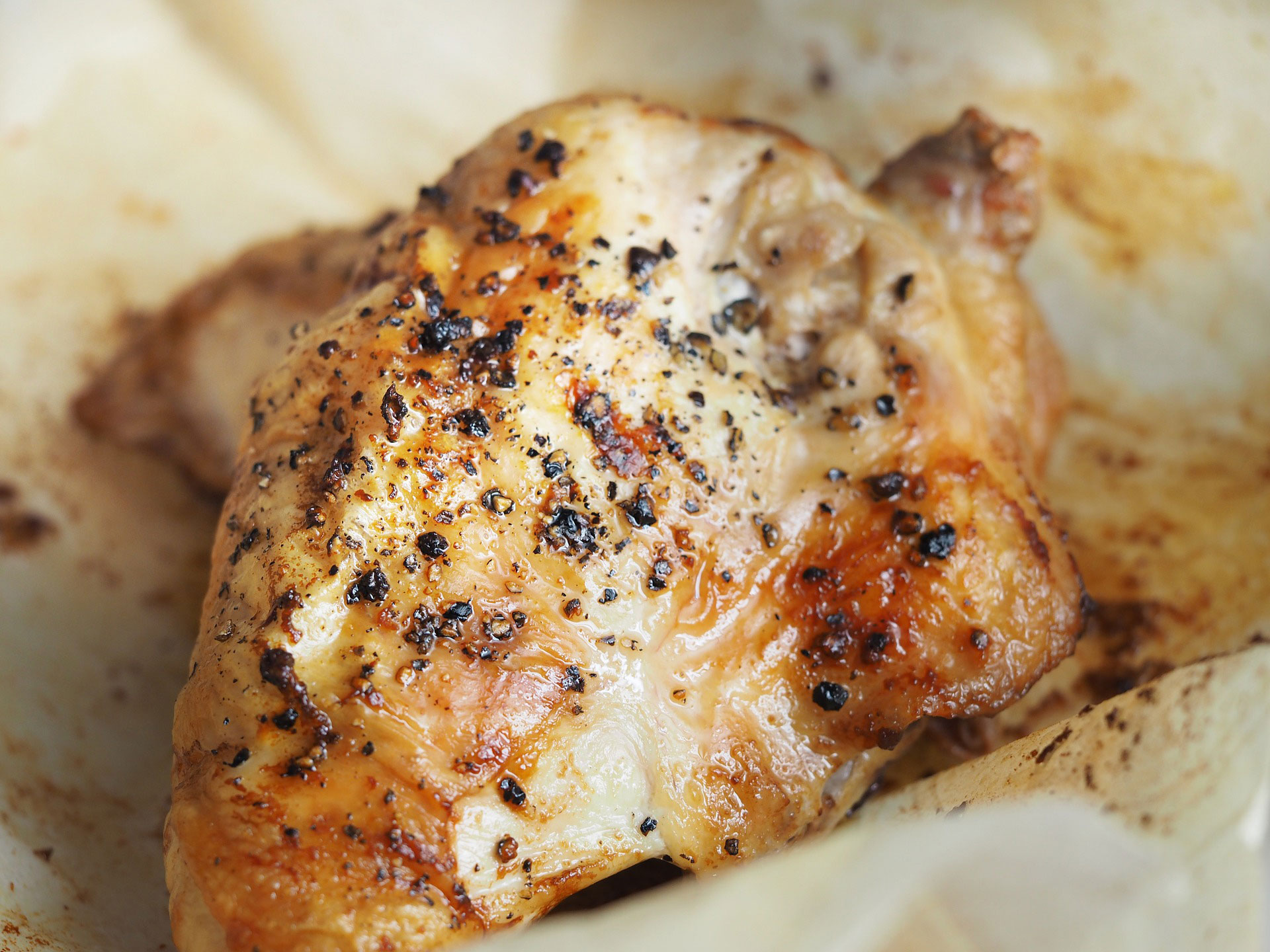 I found this Creamy Lemon Herb Chicken recipe on a Knorr Lemon Dill (that’s what it was called before Lemon Herb) Sauce Mix.

It has been a family favorite ever since. I often add extra lemon juice as I like things lemony.

This is awesome and very easy to make. 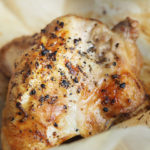 This is awesome and very easy to make.

If You Want Your Steak To Be Amazing Then You Need To Make Sure You Do This One Thing First!

Many of us love steak every once in a while. It is just so juicy, looks fantastic and is just completely mouthwatering. When a steak is cooked to perfection, it a truly amazing meal that you just can’t get enough of!

However, sometimes when we cook our own steak at home it just doesn’t turn out the way we expected it to at all.

Before you resort to never enjoying a delicious steak in the comfort of your kitchen, we have the important step you may have been forgetting about all this time. Once you make sure to always follow this step, your steaks will turn out so amazing every single time!

The One Step To Always Make Sure You Do When Cooking Steak Is:

Take off the chill.

Many recipes suggest that taking your steak out of the fridge before cooking is all about bringing the steak to room temperature. Most steaks, especially a thick-cut rib-eye or porterhouse, would actually require hours out of the fridge to reach such internal temperatures.

Instead think of this step as taking the chill off your steak; even just 30 minutes makes the steak’s exterior warmer, but keeps the center chilly.

Any more than two hours out of the fridge and your steak will start to lose its chill in a bad way. Moisture can be drawn out, especially if you’ve salted in advance, which makes the steak harder to brown. A steak left at room temperature for longer will have a larger band of gray meat.

As you can see, all you have to do is allow your steak to chill outside of the fridge for about thirty minutes and no more than two hours. Then it will turn out great.

These top-rated recipes show the best of comfort food from the South.

Satisfy your soul with these delicious and wholesome Southern favorites from our kitchen to yours.

If you happen to be Italian, look away right now. This wild west spaghetti will make you gasp in outrage.

Or, if you’re willing to try out new things, you might just like this adaptation of an Italian classic. The difference here is that this spaghetti has cheddar cheese, green onions and… bacon. Everyone loves bacon, right?

Its sauce is made with hearty beef stock, and it’s garnished with green onions. And it has bacon. Seriously… can you really say “no” to bacon? 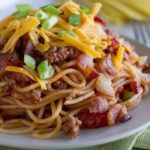 Check out the original source for this recipe with step-by-step photographs and helpful tips as well as many other delicious recipes at: TasteAndTellBlog.com.

This ham recipe is a pretty special one. It’s a slow cooker recipe, which isn’t particularly special, but it does make it a lot easier.

No, what makes it special is that it uses Coca Cola in the recipe, and it’s amazing! It really gives it a distinct flavor to the ham, and it comes out so nice and moist.

There’s nothing worse than dry pork products. Ugh. Shake ‘n’ Bake is why I thought I hated pork for so long. So dry and yucky.

Luckily for everyone, this recipe is moist, flavorful, and absolutely wonderful!

Place the ham in the slow cooker.

In a small saucepan, combine ¼ cup of the brown sugar, cola, and mustard over high heat. Bring to a boil and make sure the sugar has dissolved. Pour the mixture over the ham. If your ham is pre-sliced make sure some of the glaze goes in between the slices.

Take the remaining ¼ cup of brown sugar and sprinkle over the top of the ham.

Cook on low for 6-8 hours or high for 4-6 hours, basting with the cooking juices every few hours.

Remove ham from slow cooker and let cool a bit until it can be handled. Slice the ham and serve.

If not serving immediately, preheat the broiler and transfer the ham to a oven-safe baking dish. Brush with some of the leftover liquid and broil for about 5 minutes, glazing with additional liquid as preferred. 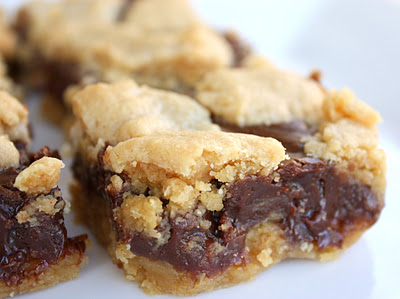 These Peanut Butter Chocolate Bars have layers of buttery cake mix and a coconut chocolate creamy filling. How could this not be heaven?

Peanut Butter, chocolate, cake mix… that’s it! I have been making these for a couple of years ever since I had them at my friend’s chocolate party.

This is very, very rich. For me to say that is saying a lot. They are probably 10,845 Weight Watcher points! Decadent. 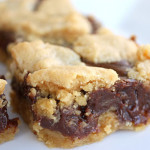 Delicious Peanut Butter Chocolate Bars that are super simple to make because they start with cake mix! 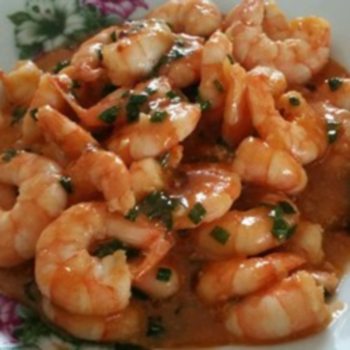 Quick and Easy Szechwan Style Shrimp is a spicy shrimp recipe that really is quick and easy. It’s perfect for company fare.

However, it might not be a good recipe for small children or anyone with a tongue that can’t handle the heat.

You can tone down the heat just by adjusting the amount of crushed red pepper you use. For my tastes, however, it’s perfect just like it is.

The sauce makes this recipe. I feel it would probably be just as good with chicken tenders or maybe even some other type of meat. It can also be made in advance.

It’s so good that you might want to consider doubling the sauce ingredients just to have some in the fridge! 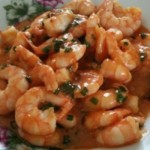 This Szechwan Style Shrimp is perfect for a main dish for two or appetizer for several!

This Chocolate Ganache Tart is an extremely easy and very chocolaty tart. It’s like melted chocolate candy layered on top of a chocolate cookie. 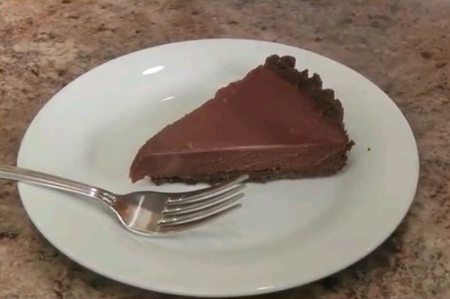 This is an extremely easy recipe. In fact the only difficult thing is pressing the cookie layer in the tart pan. If you can call that difficult.

Satisfy your chocolate cravings with this delicious recipe. 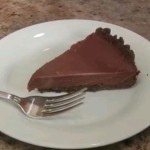 This Chocolate Ganache Tart is really easy to make and yet elegant enough for company!