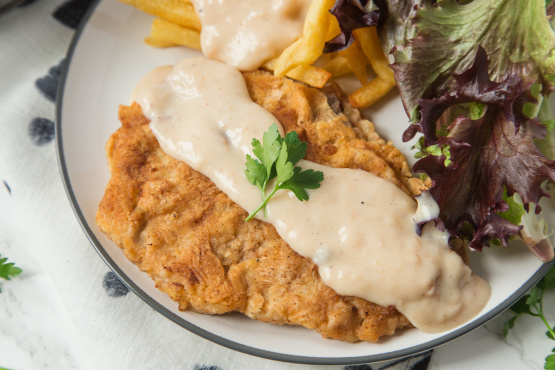 Over the years I’ve made a lot of country fried steak. But this recipe is by far the best one I’ve ever used. The cube steaks turn out crispy and so tender!

Delicious! What’s best is this meal is so cheap… yet so very satisfying.

What’s The Difference In Country Fried And Chicken Fried?

The difference in country-fried and chicken fried steak is negligible, to say the least. They are both seasoned and fried with a crispy coating.

When I was a little fella’ my family lived in a tiny German settlement in Texas for a while. The Germans are given credit for frying things that aren’t chicken as if it was chicken!

Chicken Fried Steak is very similar to the German Wienerschnitzel and is an excellent cooking method for tougher cuts of meat.

Country fried is almost identical. If there is a difference it’s in the coating. Some say that only chicken fried steak uses eggs in the coating whereas country-fried only uses a flour base.

So What’s the Difference?

Now, to me, that’s getting a little picky about naming a dish. They are both crispy fried pieces of beef served with gravy.

So in my kitchen, the difference is that there isn’t any difference. 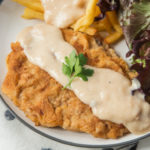 Country Fried Steak is one of the least expensive beef dishes you can serve.

Serve Country Fried Steaks with plenty of gravy on top, and mashed potatoes on the side (double gravy recipe if you use a LOT of gravy on your potatoes, etc).

The gravy is a given. You just got to have gravy with this.

My Mom always insisted on a green veggie with most meals. Sticking with that rule I go with Southern-fried okra!

That’s the meal. Steak and gravy with mashed potatoes and fried okra. You can throw in a salad if you like. I don’t most of the time.

Recipe based on one by Sue Lau
Photo by anniesnomsblog