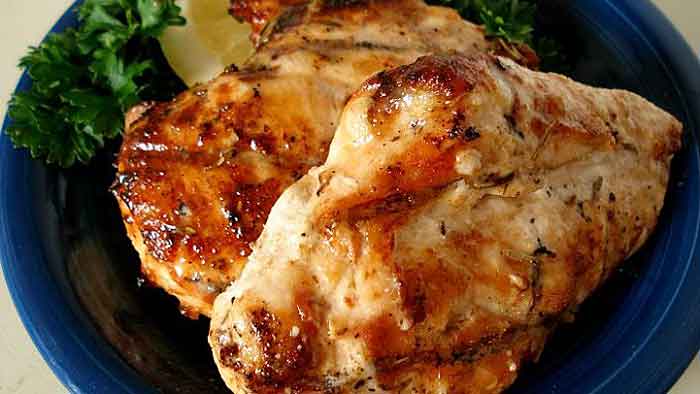 Grilled Chicken Breasts With a Beer Chicken Marinade makes a great backyard barbecue! Not that you wouldn’t know what to do with a couple of extra beers, but I’m betting you weren’t thinking about a recipe for grilled chicken!

Use what ever kind of beer you like, even light beer, if you are counting calories.

One beer makes up the grilled chicken marinade recipe along with the spices and seasonings; the other is simmered with butter and more seasonings.

You better buy extra, because there won’t be any beer leftover, or chicken breasts either!

Say goodbye to boring chicken breasts with this recipe. It's the beer chicken marinade that makes the difference! Prep time includes one hour for marinating.

Food For Thought – This is such a fun recipe to play around with. Try to stump guests by adding unusual spices to the marinade and basting sauce. You can spice it up with cayenne or Tabasco, or add ground cumin and chili powder. No one will guess that this isn’t a pricey item from your local gourmet shop.

Try the beer and butter sauce next time you grill shrimp or fish. Add some fresh dill if you are grilling salmon steaks, or granulated garlic for shrimp.

Good To Know – You can pound the chicken breasts between 2 sheets of plastic before you marinate them if you want them to cook faster on the grill. And if you don’t have a grill, consider using your oven broiler. Watch carefully so that the butter doesn’t burn.

Give Grilled Chicken Breasts With a Beer Chicken Marinade a try!