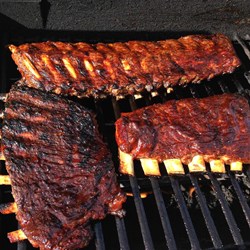 This is an unusual BBQ Pork Ribs Recipe. The pork ribs are simmered in beer until tender and then finished in the oven with the BBQ sauce and lemon. This is a super ribs recipe.

I prefer doing them on the grill but the oven works when the situation calls for it.

Pour the beer and the water into a large stockpot. Add the salt and stir to dissolve. Bring the mixture to a boil over medium high heat.

In a large skillet or frying pan heat the vegetable oil over high heat. Sear the ribs on both sides in the skillet. Place the ribs on paper towels to briefly drain.

Add the seared ribs to the beer and water mixture. Add more water as needed to cover the ribs. Cover the pot and simmer for 2 hours.

While the ribs are simmering, melt the butter in a saucepan and saute the onions and garlic until the onions are translucent.

Stir in the tomatoes, ketchup, molasses, Worcestershire, mustard, salt, hot pepper sauce and vinegar. Bring the mixture to a slow boil, stirring constantly. Reduce the heat to low and leave it simmering until the ribs are finished.

Preheat your oven to 350 degrees F.

Drain the ribs and arrange them in a shallow roasting pan. Ladle the sauce over the ribs evenly. Slice each slice of lemon in half and distribute the half slices on top of the sauce.

Cover the pan with loosely with foil and place in the oven for 15 minutes, and then uncover for the last 10, a total of 25 minutes oven time.

Remove the rinds from the lemon slices and discard the rinds. Return the lemon flesh to the sauce on top of the ribs.

Cover the ribs with more sauce and serve.

Diehard BBQ ribs fanatics will claim this is not BBQ ribs because the ribs are done in the oven and not on a bbq grill or smoker. The proof is in the eating, however, and you will get rave reviews with this BBQ Pork Ribs Recipe.