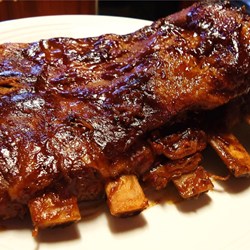 Preheat your oven to 400 degrees F.

Season the pork spare ribs with salt and pepper. Place them in a shallow baking pan and brown in the oven for 15 minutes. Turn the ribs over and brown the other side for another 15 minutes. Drain off all the excess fat.

In a medium bowl mix together the ketchup, chili sauce, brown sugar, vinegar, oregano, Worcestershire sauce, hot sauce, and salt and pepper. Place the spare ribs in slow cooker. Pour the sauce over the spare ribs and turn to coat.

(For a smoky flavor add a few dashes of liquid smoke to the sauce.)

Cover and cook on Low for 6 to 8 hours, or until the spare ribs are tender. Stir once or twice during the cooking time to keep the ribs from sticking to the sides of the pot.

During the last half hour turn the cooker to high with the lid ajar to thicken the sauce.

Serve the spare ribs with cole slaw and baked beans and sauce on the side. Be ready for compliments when you make this barbecue spare ribs recipe.