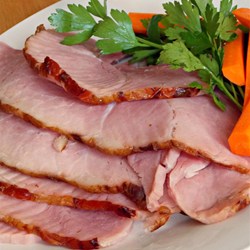 This baked ham recipe features a ham glaze of pineapple juice, honey and orange juice. The ham is covered with the glaze and then baked for just one hour, which makes it an easy ham recipe.

Preheat your oven to 350 degrees F.

Place the ham in a roasting pan and dot with the cloves.

In a saucepan combine the pineapple juice, brown sugar, honey and orange juice. Stir and simmer over medium-low heat until the mixture thickened, about 10 minutes. Pour the glaze over the ham.

Bake the ham uncovered for 1 hour in the preheated oven.

This is a delicious baked ham and could become your only recipe for baked ham. In the unlikely event you have leftovers use them for this baked ham quiche recipe.

This is a delicious baked ham quiche recipe with a hash brown potato crust.

Press the hash brown potatoes onto the bottom and sides of a 9 inch pie dish. Drizzle the potatoes with melted butter, and sprinkle with seasoning salt. Bake the hash browns in a preheated oven for 20 minutes, or until the potatoes begin to brown.

In a separate bowl, whisk together the eggs, milk, salt, pepper, and a little seasoning salt. When the crust is ready, spread the ham mixture on the bottom and then cover with the egg mixture.

Reduce the oven temperature to 350 degrees F. Bake the baked ham quiche in the preheated oven for 20 to 25 minutes, or until the filling is puffed and golden brown.

This is a quick ham quiche recipe when you don’t want to make a traditional quiche crust. It’s great for breakfast or brunch or even breakfast in bed for that special someone.